The following is a list of significant words that recur in the Q-SORT webpages, as well as in the research articles where Q-SORT results are published. Follow the links within the text to delve deeper in each concept.

The electron is an elementary particle normally bound to an atom. Scientists can easily obtain free electrons from a variety of sources that work by wrenching electrons away from atoms, exploiting different physical mechanisms. Depending on the situation, electrons can behave as waves or as particles. This is one of the puzzling aspects of quantum mechanics.

An electron is described by a quantum mechanical wavefunction, which in general stretches all over the three-dimensional space. The wavefunction is obtained as a solution of the Schroedinger equation or, if the electron is moving at extremely high speed, of the Dirac equation.

Invented by Ernst Ruska and Max Knoll in 1933, the electron microscope uses electrons instead of photons in order to probe the sample.

Amongst other things, this allows researchers to achieve much greater resolutions and magnifications compared to optical microscopes.

This is due to the fact that scientists can decrease the wavelength of electrons at will by accelerating them with suitable electric fields. This in turn increases the resolving power of the microscope, which is directly proportional to the wavelength of the probing particle.

The same cannot be done with photons, as their wavelength in a given medium is determined once they are emitted by the source, and stays fixed until they are absorbed. Moreover, photons in the visible spectrum have a lower limit for their wavelength, which is significantly greater than the wavelengths typically attainable by an electron microscope.

Electrons fired onto the sample interact with it in a variety of ways: they can bounce off losing energy, they can traverse it and be delayed, and so on. Electron microscopes come in various forms according to the way they employ electrons and pick up the signals resulting from their interaction with matter. If the microscope picks up the electron beam as transmitted through the sample, one has TEM (transmission electron microscopy). TEM can achieve the highest resolutions, allowing scientists to image even individual atoms, but is limited to thin samples. If the transmitted beam is raster scanned across the sample, one has STEM (scanning transmission electron microscopy). If the electron beam is raster scanned across the sample and the resulting loss of energy is picked up point by point, one has SEM (scanning electron microscopy). Many other probing strategies making use of electrons are possible.

In physics two waves are said to be coherent if they have exactly the same frequency and a constant phase difference. For example, white light is incoherent as it consists of different frequencies. In an electron microscope only one electron at a time is flying through, so the coherence is defined between two parts of the same electron wavefunction.

Perfect coherence does not exist in the real world, as actual wave packets have a finite size that typically depends on the emission process. So it is customary to talk about a coherence length, that is defined by the cross-correlation (or auto-correlation) function of the wave with another wave (or with itself, respectively). Depending on whether the correlation is calculated along the propagation direction or its orthogonal plane, we speak of longitudinal (a.k.a. temporal) coherence and of spatial coherence respectively.

The degree of coherence is a very important factor in all experiments concerning Q-SORT .

Short for orbital angular momentum. Intuitively, this gives a measure of how fast a particle is orbiting around a certain axis. Whilst in classical physics the OAM can take any value, in quantum mechanics -which provides the correct description of TEM physics- only certain OAM values are allowed, i.e. OAM is quantised.

In TEM, the OAM of an electron beam transmitted through a sample provides information on the rotational symmetries of the sample. Amongst other things, the Sorter (see below) allows researchers to analyse the various OAM components of an electron beam.

Quantum mechanics allows scientists to shape a beam of photons or of electrons in the form of a vortex. This is an impossible feat according to classical physics, since in classical physics particles such as electrons travel only in straight lines in the absence of fields bending their trajectories. On the other hand, thanks to the uncertainty principle, quantum mechanics allows an electron to follow many classical trajectories at the same time: the vortex is born out of this superposition of skewed trajectories.

More specifically, in the case of vortex beams the straight classical trajectories are arranged so as to form a hyperboloid of one sheet. This ruled surface is commonly seen when one cooks spaghetti: 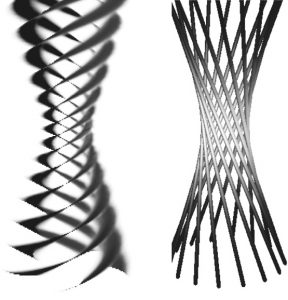 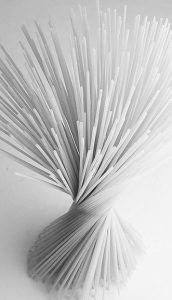 The above figure shows the helical wavefronts of vortex beams and the corresponding envelope of classical straight trajectories, the same one that a twisted sheaf of spaghetti tends to form. The vortex is helical as the wavefront has to be perpendicular to the direction of propagation of the wave. This is a consequence of the Schroedinger equation.

Vortex beams, like all wavefunctions, are solutions of the Schroedinger equation. Solving the latter in cylindrical coordinates yields a family of functions known as Bessel beams. Each Bessel beam in the family is characterised by two numbers, one of which is integer and corresponds to a quantised value of the OAM. The amplitude of Bessel beams on the plane perpendicular to the propagation direction is always the same, irrespective of the propagation distance.

Laguerre-Gauss beams are also a family of solutions of the Schroedinger equation. They are obtained by solving it in cylindrical coordinates under the paraxial approximation. Each L-G beam in the family is characterised by two integer numbers, one of which corresponds to a quantised value of the OAM. L-G beams expand on the plane perpendicular to the propagation direction, as the propagation distance increases. Unlike Bessel beams, L-G beams can be physically realised.

The wavefunction of the electron can be thought of as a sum of components, just as white light is actually comprised of light of many different colours.

Just like a prism can split white light into its colour components, the Sorter can split the electron wavefunction so as to visualise its different components in different positions on a screen or a detector.

Holograms were first demonstrated by Gabor using photons. The Quantum Sorter employs special nanofabricated holograms that work on electrons: they are used in order to shape the electron beam so that it possesses certain desired properties.

Holography comes from the Greek words ὅλος (hólos; “whole”) and γραφή (graphḗ; “writing” or “drawing”). Holography as invented by Gabor can be viewed as a special form of photography that preserves the phase information that is normally lost in the process of imaging (hence the holo- prefix): by recording a specially-devised interference pattern on a photosensitive surface, Gabor was able to store the information on the phase of the photons as they interacted with the object that was being imaged. Passing light through the hologram allowed Gabor to recreate the same photon wavefront, even when the object was absent.

The holograms employed by the Quantum Sorter are not physically recorded like those of Gabor but are fabricated using a FIB (focused ion beam), as the result of electron-interference simulations done on a computer. This is why they are called synthetic holograms.

In the scientific literature this term is generally used for holograms that modulate just the phase of the wavefunction but not its amplitude.